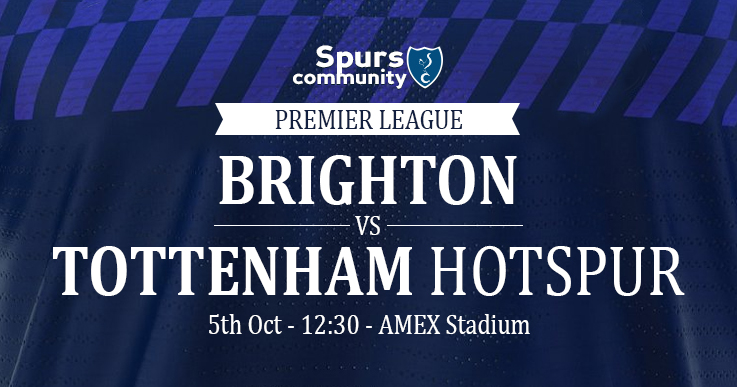 Brighton are win less in all four of their Premier League (PL) meetings with us (W0 D1 L3), losing both matches last season. We haven't lost against Brighton since April 1983 when we were beaten 2-1 in a top-flight fixture. We have won 5 and drawn 1 of 6 matches against the Seagulls in all competitions since then.

Brighton havent led for a single minute in any of their 4 PL matches against us, with their 2 goals both coming in matches when they were trailing. The have lost just on eof their last 19 League matches in October (W10 D8 L1), losing 2-0 away at Arsenal in 2017.

Each of our last 9 PL goals have been scored before half time, with us last netting in the second half against Man City in our second match of the season. Eriksen has provided 19 assists at Spurs in the PL and could become the 5th player to provide 20+ for single player in the competition, after Lampard for Drogba, Anderton for Sheringham, McManaman for Fowler and Silva for Aguero ( all 20)

Banner courtesy of @chrissivad
Last edited by a moderator: Oct 5, 2019

Its time to reboot, reset, restart or whatever you want to call it, but something has to give! Only a win will be acceptable. And I am not saying that just because its Brighton.
Last edited: Oct 4, 2019
S

Winless run away from home to continue draw at best for me.

As knee jerk as it might be, but a bad result and performance here could/should be the end. Unfortunately.

Turn up and we win comfortably, but away (and even at home) we aren't turning up this season.

If we play the diamond then Poch out at HT
W

Just please please can the players & Potch show some character show that they do care about the club and the fans and they want to right the wrongs of Wednesday night and put in a performance that shows this.

For Potch he needs to get rid of the fucking diamond!

For the players it’s all about showing character and that they are playing for Potch and the club not just going through motions collecting their pay packets and in some cases waiting till January to start looking for their big pay day and free transfer.

They all just need to give us Something that starts to help to ease the pain/embarrassment I’m sure the majority of us have been feeling since Tuesday night.
Last edited: Oct 4, 2019
1

It's as clear as day as to what needs to happen tomorrow as far as we're concerned.
Poch needs to abandon the diamond formation, and the players need to show up and put down a clear statement to our fans that many aspects of that performance were on Tuesday were embarrassing and down right unprofessional. There are no other words to describe how we simply gave up in that way infront of me and others who paid good money and this was never more emphasised after that 5th goal went in and they quickly scored 2 more in quick succession.

Surely as a collective, whoever is picked, as a matter of professional pride will be desperate to show us as fans that they want to begin by putting in a fully committed performance after that shitshow, and if they don't share that desire, we should all be asking, why not !

I suspect that players like Kane who would have been really hurt by that humiliation, as a fan and a player will be chomping at the bit to put in a shift and some goals tomorrow, by leading by example, and whilst it won't banish the memory, it will be a small step in the right direction.
A

I wonder what the reaction would be like over here when we start with a midfield diamond tomorrow?

Thanks as always @Bulletspur for the Match Thread.

It’s very much crunch time. We, or rather the squad and management, need to lay down a marker here.

We need to see that the issues that have been plaguing is for the last nine months have been purged or, at the very least, will no longer translate to the performance in the pitch.

And it has to be convincing. A 1-0 victory that relies on a ball bouncing off Coco’s head and then Sonny’s left buttcheek before trickling into the goal while the Brighton goalie has his back turned won’t cut it. It has to a proper firing-on-all-cylinders performance.

We need to absolutely destroy Brighton and make them question the meaning of life.
N

Ditch that booody diamond. Either play Winks and NDombele together or Sissoko and NDombele . Go with the 4 upfront in Kane, Lucas, Lamela and Son. Drop both Ali and Eriksen to the bench. This is a must win, unacceptable any other result.

We'll win this regardless of the team that Poch puts out. If it's the usual line up and formation, those players will want to redeem themselves from Tuesday and I can see us getting a 2-0 or 2-1 win. If however, Poch is brave enough to shake things up, change formation and drop the players whose minds are elsewhere, I can see us winning comfortably.

From a league point of view this is not a must win. We have picked up points away from home against City and Arsenal, and Leicester will upset other teams this season aswell. The Newcastle defeat is really the only one that imo has fucked things up, and we have plenty of time to make amends. Having said that, a win this weekend and next should put a spring in our step and set us up nicely against Liverpool at the end of the month.

Ironically this is a match where the diamond could work a treat, don't think Brighton will be able to take advantage of its flaws unlike Bayern.
J

Not confident we will get a result here, we haven’t won away from home in the league since beating a poor subsequently relegated Fulham side in January, add to that we couldn’t beat a league 2 side away from home last week I fail to see the we will beat them easily brigades optimism

Have to win, drop points here and it could be the end. We need to get this away form sorted because our next 5 are Brighton, Liverpool, Everton, West Ham and United. Not a nice run of fixtures for a side lacking confidence and form away from home.

It would not surprise me if Tottenham manager Pochettino leaves the club in the near future.

Since the summer, some of the things he has said - like when he talked about how he is 'only the coach' and has no say in transfers - makes it feel to me like he is in the process of a long break-up.

I have thought for a while that Pochettino looks tired and how it looks like being Spurs manager has become a chore for him - but maybe he does not need time out of football, just out of Tottenham.

Spurs paid the price for chasing their Champions League game against Bayern on Tuesday when they were 4-2 down, and ended up conceding seven goals in total.

But I still think they will go to Brighton and win.

Spurs have got some very good players. Yes, they have had a stinker but surely there will be a reaction this weekend.

And the Seagulls have got problems of their own, with only two points from their past six games.

Brighton manager Graham Potter is reaching the stage where he might need to rethink his philosophy about playing good football for the sake of picking up some points. 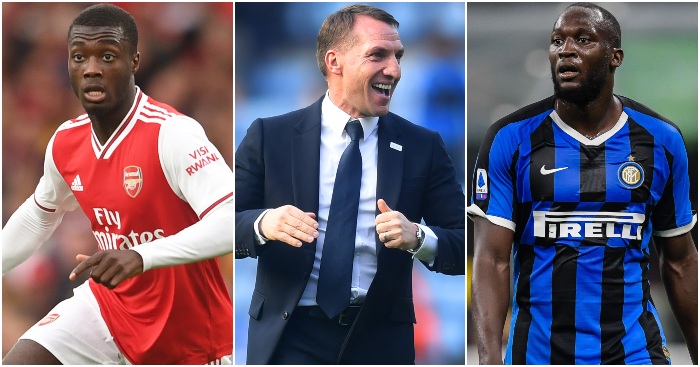 Football365 - Brendan goes back to Anfield, Newcastle have some making up to do and Pochettino needs a plan...

Manager to watch – Mauricio Pochettino
‘The end of days. The end of the road. The end of an era.’ That was Winty’s verdict after Pochettino had watched his Tottenham side crumble in the Champions League and though it remains likely that the Bayern Munich humiliation represented a nadir for the manager at this club, neither party appears willing to make the first move if indeed either wants a separation.

So on Pochettino must go to Brighton on Saturday lunchtime amid continued speculation over his behaviour around the Spurs squad and how the players have interpreted that. Widespread reports suggest the players have noticed a change in Pochettino’s demeanour since the summer, when he admitted that he would have left had Spurs beaten Liverpool in the Champions League final. Pochettino got his retaliation in first, accusing his players of having ‘different agendas’.

Whichever side you take, no one can argue that there is not something wrong at Tottenham – something deep-rooted and difficult to put right, especially when the suspicion is that the manager isn’t all that fussed about staying to apply a fix. Nor is there any one single solution. Pochettino’s has been out-thought tactically too often this term, while his motivational techniques are also failing. The Argentine can’t put one right without the other.

Our first hint at Pochettino’s intent will come from his team-sheet. The greatest area for concern remains his hopelessly-imbalanced midfield. With each season Pochettino likes to change his engine room and some new signings offer him more options than ever. But what he has tried so far hasn’t worked. Harry Winks has had a creditable start to the season, but the England midfielder playing centrally forces new boy Tanguy Ndombele into a slightly wider, more unfamiliar role and though he has shown glimpses, it is hard to tell whether he is unfit or he if he permanently looks knackered.

Pochettino will have even greater resources at his disposal in the coming weeks, especially in the creative department. But in the meantime, the Spurs boss has to find a Band-Aid big enough at Brighton to stop his side bleeding out.
Click to expand...

This is a huge game for me. I’ve stated that I believe it is the beginning of the end for Poch and that I’d like a change. I would love to be proven wrong and see us really turn it on tomorrow which then kick starts our season. COYS!!
P

Cambridge Spur said:
This is a huge game for me. I’ve stated that I believe it is the beginning of the end for Poch and that I’d like a change. I would love to be proven wrong and see us really turn it on tomorrow which then kick starts our season. COYS!!
Click to expand...

Same here, and just to preempt it, a nervy narrow win against Brighton tomorrow will not convince me to change my mind about Poch out. Just like last week v Southampton didn’t.

Most of us on the site should be able to manage this Spurs squad to a win tomorrow at Brighton.

Any win gives Poch a stay of execution to at least the next game, but a draw or defeat will be unfathomable.
C

Primativ said:
Same here, and just to preempt it, a nervy narrow win against Brighton tomorrow will not convince me to change my mind about Poch out. Just like last week v Southampton didn’t.

Most of us on the site should be able to manage this Spurs squad to a win tomorrow at Brighton.

Any win gives Poch a stay of execution to at least the next game, but a draw or defeat will be unfathomable.
Click to expand...

It’s difficult to see us flick a switch and all of a sudden start playing amazing football so I’ll say any sort of win would do for the moment but I agree that we need to see evidence of a plan moving forward. I don’t want to see Eriksen in the team. It’s clear he’s off so we need to start preparing for life without him.
You must log in or register to reply here.
Share:
Facebook Twitter Reddit Pinterest Tumblr WhatsApp Email Link
Top