Rochdale - worst pitch in the league

Basil Brush said:
We will just play in the tent.
Click to expand...

Or under a giant trampoline?
These were original plans for the Olympic Stadium after London 2012. Sadly WHam moved the trampolines into the stands. 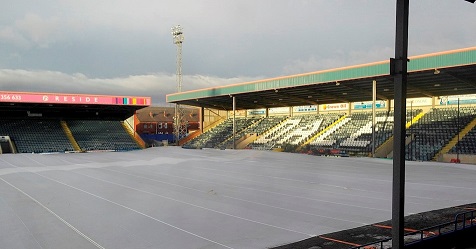 Woland said:
Or under a giant trampoline?
These were original plans for the Olympic Stadium after London 2012. Sadly WHam moved the trampolines into the stands.

The spammers have always been a trampoline club.
J

jimbo said:
A marquee is a type of tent.
Click to expand...

Have you not noticed that when we sign a new player
we erect a big tent for the welcome by Mauricio
and serve drinks and sarnies for the Press
who canvas for quotes and pictures of the occasion.

We don't want that riff-raff
in the Boardroom.

So did Cyril Smith..

Wheeler Dealer said:
So did Cyril Smith..
Click to expand...

Yes she did. We should make her pay for a new pitch.

WiganSpur said:
If they don't want to move it and they're not gonna stump up to relay the pitch then we should just pay to have it done. Better to do that than risk us going out of the cup or getting injuries to key players.
Click to expand...

It'd be a nice gesture and would definitely be preferable to most alternatives but what sort of precedent would that set? Also, if we do lay den a new pitch and still get a bunch of injuries...well that would be irony personified to say the least lol.
C

They currently have 2 injured players. Yes it will be an awful surface to play on if even playable. But I think the injuries thing has been over done. Basically it’s like a beach. Don’t get to many injuries down the beach. A crap plastic pitch I’d be much more worried.

***** on football focus wanting us to play on the pitch because it's a leveller, part of the magic of the fa cup
Fuck off!

Rochdale chairman Chris Dunphy insists his club’s controversial pitch should hold no fears for Tottenham’s players despite Mauricio Pochettino’s concerns for their safety.

The Spurs manager was alarmed when he saw pictures of the League One club’s heavily-sanded playing surface, which will stage the FA Cup fifth-round tie a week on Sunday, and suggested that holding the fixture at Spotland was a danger to the health of the players.

Yet Dunphy, whose club are in regular contact with the Football Association, who are very reluctant to consider switching the tie, says he can “guarantee” that the match will not be moved to another venue. “We are in touch with the FA and we will be playing that game at Spotland,” he told Standard Sport.

“We would never do anything that would endanger the safety of our players. It is the referee’s opinion that counts but we do not have a problem for Saturday's League One game against Fleetwood.

“People who are saying the pitch is like a pudding have never been anywhere near it. It has played very well.

“I can guarantee the game will be played at Spotland. The pitch will be perfect for the Spurs superstars.”


Dunphy then joked: “It just depends whether they want to play us!”

The Pennine area, where Rochdale is located, suffered a period of particularly bad weather late last year — and the pitch suffered. To try to ensure it is ready, the playing area will be covered by a ‘tent’ for the whole of next week and warm air will be directed onto the surface to try to improve it.

Rochdale have used the ‘drill and fill’ technique approved by the Football League, which involved drilling more than 100,000 holes into the pitch and filling them with sand in order to drain away the excess water.

The pitch was passed fit for the fourth-round replay against Millwall earlier this week, which Rochdale won 1-0.

Pochettino planned to discuss the matter with Tottenham chairman Daniel Levy on Thursday, but the FA are not minded to consider changing the fixture.

They believe that to do so would set a dangerous precedent for future ties, when the bigger club may be unhappy with conditions at a lower-league ground. The governing body provide subsidised pitch protection to clubs involved in the Cup who experience problems with their pitches.
Click to expand...

As today's game postponed because of it

Hand was forced, likely the fa cup game wouldn't go ahead either
They'd been happy to play the entire season on that thing

there's really not enough time for a new pitch to bed in so it'll cut up like a field in the first 10 minutes. Still, better than what they have at the moment at least.

Basil Brush said:
So Levy stumped up....
Click to expand...

Doubt it. The FA probably had a word. Not necessarily regarding us but if they're having to postpone numerous games because of it then there's only one solution.
G

Their players will become not match-fit anymore if they carry on postponing those games!

Great news. The re-turfing process has begun. Not sure whether it would be ready for our game though.

Any pictures of the re-surfaced pitch? I know they were doing it earlier in the week.